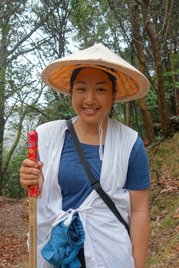 My name is Marianne and I completed the 88 Temple Shikoku Pilgrimage in March-April 2017 at the age of 28. I am of Japanese (through my father) and Filipino (through my mother) descent, but I was born and raised near Toronto, Ontario, Canada. However, I now live and work elsewhere in Ontario as a registered nurse. I own one obese cat and, apparently, a lot of dust bunnies because cleaning is not my strong point. Traveling has always been a love of mine, and the Shikoku Pilgrimage was an adventure I could not stop thinking about prior to making the journey myself.

Why did I create this blog?

I actually learned about the pilgrimage in university, but what fueled my interest were previous henro's blogs and accounts of their own pilgrimages. Not only did they give me an idea of what to expect, they were also important sources of information, as well as morale boosters. However, not all henro blogs discuss some of the very real hardships of the pilgrimage. Or maybe they just had far better luck than I did or were more physically fit than I was or were better prepared than I was. Well, whatever the case was, I encountered problems very early on in my pilgrimage that nearly ended my journey, and I felt like a failure compared to the other henro based on what I read in their blogs. I wanted to write about my own experiences and hopefully, someone out there will find a bit of comfort knowing someone out there also felt like giving up every other day but still managed to finish it.

All journal entries were originally written on my travel blog, Allons-y, Pamplemousse! However, I wanted a more organized, more searchable blog specifically for my pilgrimage entries to make it easier for readers (and future and present henro) to find things. I also wanted to add my own comments, looking back on each day, as well as add extra pages, like information about what I packed or words of advice/random thoughts.

All entries are pretty much copied directly from the original blog to preserve my thoughts and feelings of each day. However, there are still some changes made, mostly to correct spelling and/or grammar or change sentences to make them clearer.
Powered by